(reproduced from my Angst and Speed blog) 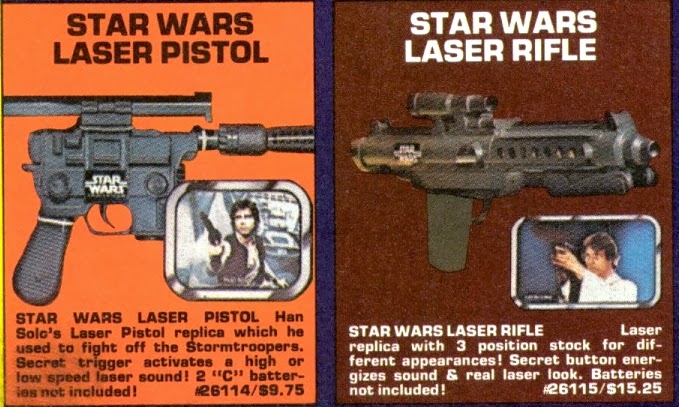 There came a time in my childhood when two of the most awesome guns were made available by Kenner; the Star Wars (Han Solo) Laser Pistol and the Star Wars 3 Position Laser Rifle.  This gave the "good guys" a gun to use and the "bad guys" a gun to use as well.  For Christmas of 1978 I received the Star Wars 3 Position Laser Rifle while my friend three houses down got the Star Wars Laser Pistol.  After that, the hours were spent running around the neighborhood draining pairs of C and D sized batteries to our hearts' content and our parents' dismay (disposable batteries were kind of expensive during the Jimmy Carter era).

The weapons were somewhat faithful reproductions of their on screen counterparts but the sounds that these toys produced were nowhere near what the sounds in the movie were.  In fact, both toy guns were activated by a two stage trigger system ... a small nipple type button in the hand grip activated something inside the gun so that when the trigger was pulled the toy gun made a noise reminiscent of either a buzzsaw at a lumber mill or a hamster being put in a blender.  We both found that even at the age of 8 years old we could make more accurate Star Wars blaster sounds using our mouths than Kenner could using electronics and back then electronics was the big thing in toys ... an electronic toy was cutting edge and these toy guns weren't the cheapest toys on the market.  They weren't the most expensive, but they weren't the cheapest either. 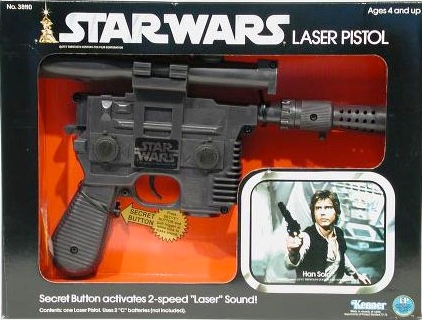 Pictured above ... Han Solo's German Mauser based heavy blaster pistol.  The trigger always felt like it would break off if you pulled it too hard.  You unscrewed the two twist knobs on the side and inserted two "C" sized batteries in the toy.  The batteries had amazingly short lives, IIRC.  Oh, yeah, both weapons had "secret buttons" which really weren't that secret in hindsight.

I think one of the things that endeared me most to the weapons of Star Wars was the fact that all of the weapons were built out of real world counterparts ... familiar counterparts ... mostly taken from World War II which fit right in with my pre-Star Wars love affair of all things World War I and World War II.  Years of being weaned on "Sgt. Rock" and "The Unknown Soldier" and "The Losers" and other combat comics and of playing with Marx "green army men" had made me more than aware of the many, many weapons used in the major wars.  As such, it was easy to see where Han Solo's blaster was made out of a early 20th century German Mauser (one of my favorite pistols of all time).  The standard Stormtrooper weapons included the standard issue blaster rifle (created from a Sterling 9mm submachinegun) and two heavy blasters created out of a German MG34 machinegun and a British Lewis machinegun.  Scopes and doo-dads were added liberally to these classic weapons but their cores, their guts, were unmistakeable which I guess made them all the more believable when they were being used because I had seen so many combat movies where the cores of those fantastic weapons had been used.

The 3 Position Laser Rifle was probably the neater (and more expensive) of the two blaster offerings but it was also the more prone to break.  Loading batteries into this toy weapon required that you twist / pop the rear loop off at the rear of the weapon, take a cover off and insert two "D" sized batteries (batteries not included).  When you pulled the secret nipple trigger below the trigger guard and then pulled the trigger the 3 Position Laser Rifle did something that the Laser Pistol did not ... it spun a yellow with black stripes "barber pole" inside the barrel ... and made a sound reminiscent of a failing starter on a AMC Pacer.

The rear loop, for whatever reason it was included, was both prone to breaking through hard play and even more prone to simply fall off and disappear.  I'm not sure why the rear loop was part of the design as it wouldn't hold the rifle on anything like a belt loop or a shoulder srap.  The rear loop wasn't required for the laser rifle to work but it was something that when it went missing you felt like your toy was incomplete.  The trigger was also way more substantial than the trigger found on the laser pistol.


What really set the Laser Rifle apart from the Laser Pistol was the three position folding stock hence the name of the weapon being 3 Position Laser Rifle.  The stock was affixed to the weapon at two swivel points located at the back and to each side of the hand grip.  On the front, a simple clip "snapped" the folding stock in tight against the barrel.  This clip also did not survive strenuous childhood rough housing and when it broke it would leave you with a folding stock that simply had to either be deployed full or held tight against the barrel.


The three positions, seen above on the box, were folded (standard), shoulder pad down up front (guard) and fully extended (turning the rifle into a real rifle).  While we never saw any of the three positions of the stock being used in the movie that didn't stop us from taking it as canon and running with it. 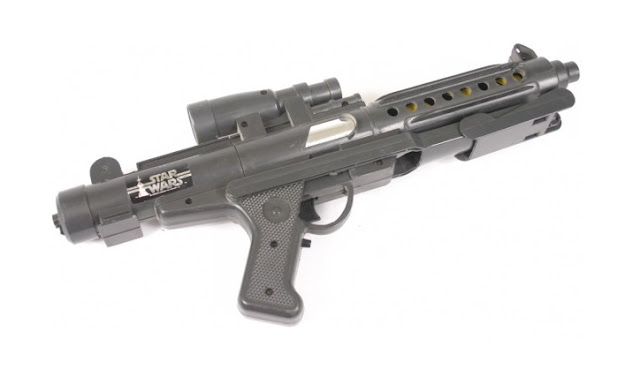 Although my original 3 Position Laser Rifle never made it with me out of childhood I was lucky enough to find a replacement on Ebay a few years ago.  The toy did include the rare (and often lost) rear D-ring type clip but the front clip for the stock was broken.  The toy blaster did not work even with new batteries and a quick inspection of the screws used to secure the casing showed that the tiny screws were heavily rusted and corroded.  If I go into this toy to see if I can fix it, it's going to require new screws as I have doubts if the heads of the current screws may even make it through a very careful disassembly.  I also plan on using a simple pair of magnets under the barrel to "grab" the stock and secure it in the folded position.

I said that I never owned the Laser Pistol ... now I do, from the same Ebay seller and in similar condition (though this toy still had some obscure, cheap-ass "C" size batteries in it that were rusting to pieces).  Other than the non-functioning electronics and the broken stock retaining clip on the laser rifle, both toy weapons seem quite well preserved for 36 year old artifacts from my childhood.  Both are dusty as hell and will require hours of careful cleaning to be fully presentable but the plastic is still non-discolored and uncracked.

I think I'll mount them on pegs on the wall of my study where, like my other iconic toys from the 1970's, I'm sure they'll incite conversation from those who remember these toys.  As I hold these toy weapons in my hands, I'm taken back to cold winter days where imagination ran free and so did we through the yards of our neighbors yelling and laughing and not having a care in the world other than how much fun we could have.
Posted by Christopher T. Shields at 6:04 PM