Okay ... this scene always intrigued me as a child (1977 "Star Wars" NKA Ep IV: ANH) ... the weapons station onboard the Imperial Stardestroyer in the opening minutes of the film.  What a neat concept shot!  However, the angles are wrong and the frames of reference are all skewed.

If the escape pod from the Tantive IV fires downwards towards Tatooine then how is this scene even possible?  It's not so much fanboying as it is trying to figure out how things work and how things fit inside other things so that they can work ... more like mechanical engineering and reverse engineering what I see in order to learn how it works and where it goes. 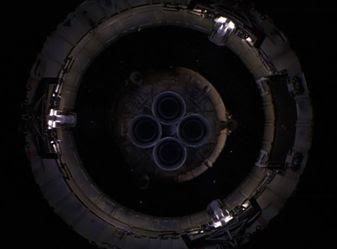 Here we see the escape pod launching down into space,
not up into the hangar of the ISD.

Shortly after the launch sequence the pod is seen falling away
from the captured Tantive IV. 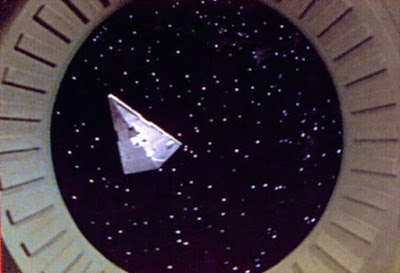 Next we see the droids looking out the viewport
of the escape pod as the ISD falls into the background. 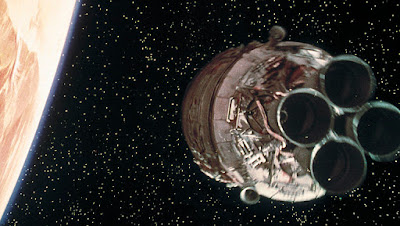 And finally a shot of the escape pod falling towards Tatooine.

We see the escape pod flying from the bottom to the top of the screen and the turbolaser cannon tracks it before the command is given not to engage.

If this was true ... either the crew is upside down in a room (ala localized gravity like the Falcon's gun wells) or that's a viewscreen that's showing what's happening under the bottom of the Stardestroyer (in which case why does the gun track an image on a viewscreen). Even as a kid the scene didn't make much sense to me ... neat as it was but I could never get the angles right in my head for how this turbolaser weapons control room could exist.

Someone mentioned the fact that when you kick a ball it goes up and then back down but this isn't the case in this scene.  It's hard to fire an escape pod up and away from a ship when that ship is docked inside the main bay of the Stardestroyer. The escape pod that the droids used was on the bottom of the Tantive IV, small pods ... check out the schematics and cross-sections book for reference. 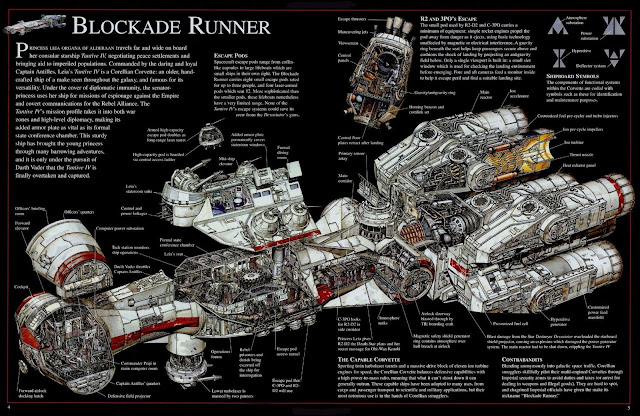 The escape pod that R2 and C3PO use is the port side rear most lower pod, according to the cross sections illustration of the Tantive IV.

I'm sure the Imperial gunners were located on the bottom of the Stardestroyer ... but if they were and the pod fires downwards, that means that they're standing upside down in the room, the turbolaser is mounted on the ceiling and that they're watching the pod fall away.

The only reason that makes sense as to how this room is set up is if what we are seeing is a weapon station, two officers, and a giant viewscreen in front of them showing a remote weapons station elsewhere in the ship ... a turbolaser cannon that is pointed out the bottom of the ISD (presumably for planetary bombardment and for engaging targets that move under the equator of the ISD's line of fire.

One other thing that bothered me as a kid when I saw this was the dialog concerning the escape pod.  The officer watching the escape pod says "There goes ANOTHER one!" and his fellow officer says "Hold your fire.  There are no life forms aboard."

Let's break that down.

This dialog is further complicated when Vader and an Imperial officer are aboard the Tantive IV and are approached by another Imperial officer who tells them that the plans for the Death Star are not aboard the Tantive IV and that an escape pod (indicating a single escape pod) was launched but no life forms were aboard.  Here we have a discrepancy between several pods being launched (and destroyed in flight) and only one pod being launched.

The implied destruction of rebels trying to get away in escape pods from the Tantive IV is just one of the instances where "Star Wars" showed the cruelty of the Empire without actually showing the cruelty of the Empire.  Other scenes were the slaughter of the Jawas and the murder of Luke's uncle and aunt ... in both instances we see the end result without seeing the action that brought about that result.  This could also be said about the interrogation droid in Princess Leia's cell ... we see it approaching her, we know what it is designed for yet the door mercifully closes on the scene before we get to take part in it.  Even the destruction of Alderaan with all of its millions (billions?) of inhabitants was done in such a way that we never saw actual suffering.  The fate of those killed when the Death Star obliterated Alderran was passed onto us only in a line of dialog said by Ben Kenobi ... and later in the visuals of the debris of the once-planet as the Falcon dropped out of hyperspace where Alderaan used to be.

I think that's one of the things that made "Star Wars" so great ... the bad guys were really bad guys but we weren't shown just how bad that they really were ... just given hints that we had to pick up on and connect the dots for ourselves and in doing so that was masterful storytelling ... the kind of masterful storytelling that got lost in the prequels, especially when Anakin Skywalker slaughtered children at the Jedi Temple.

Posted by Christopher T. Shields at 11:12 AM No comments: